What is a Green Amendment?

Green Amendments are self executing provisions added to the bill of rights section of a constitution that recognize and protect the rights of all people, including future generations, regardless of race, ethnicity, tribal membership status, socioeconomics or geography, to pure water, clean air, a stable climate, and healthy environments.

We Did It!!!!  New York is the 3rd state with a Green Amendment! 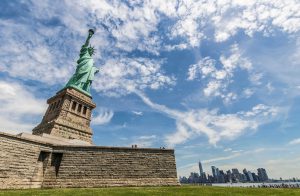 November 2, 2021, the people of New York have made the monumental decision to add the right to Clean Air, Clean Water, and a Healthful Environment to New York State’s Bill of Rights. This officially makes New York the third state in the nation, and the first in the 21st century, to add a Green Amendment to their State’s constitutional Bill of Rights.

With a vote of 70%, New Yorkers voted overwhelmingly in support of having Bill of Rights protection for the environmental rights of all New Yorkers. (Final actual vote count was 2,129,051 voted yes; 907,159 voted no)

It took five years, three legislative sessions, and a historic election--but we did it, together!
Now we will work with New Yorkers to reap the beneficial protections having a constitutional Green Amendment provides.

Art. I Section 19 of the New York Constitution will read:

In this presentation, we discuss how we can apply New York's newly established Green Amendment to work for New Yorkers and to restore justice to our communities.

On December 7, 2022, Fresh Air For The Eastside v. the State of New York, et. al, the Supreme Court of New York, the trial court level in New York State, issued the first decision based on the New York Green Amendment since it was added to the state’s constitutional Bill of Rights.

The case was brought by neighbors of a landfill. The legal arguments focused on emissions from the landfill, including greenhouse gas and noxious odor emissions, and challenged the state environmental agency’s failure to prevent a violation of the Green Amendment, the constitutional right to clean water and air, and a healthful environment, of neighbors to the landfill.

In this ruling, the Court offered important points clarifying the meaning of the amendment.

“This decision demonstrates the power and importance of recognizing the inalienable rights of all New Yorkers to clean water and air, and a healthful environment.  But for the constitutionally recognized right, the Eastside community would appear to have no remedy for being overwhelmed by the air contamination emanating from the landfill, including the knowledge that greenhouse gas emissions released from the landfill were contributing to the climate crisis and the very direct and real ramifications climate change is inflicting on New York communities,” stated Maya van Rossum, Founder of the national Green  Amendments For The Generations movement.

To read the full press release, including the points of important precedent, you can do so here.

In 2017, Assemblyman Steve Englebright first proposed bill A6279, New York’s Environmental Rights Amendment. A parallel provision was proposed in the NY Senate by Senator David Carlucci. While the bill was solidly supported in the Assembly the Senate fell short. But two years later, in 2019, the bill was repurposed and began to advance.

On April 9, 2019, Green Amendments For the Generations, key New York lawmakers, and a coalition of groups announced plans to push for approval of the Environmental Rights Bill by the New York legislature. Watch the press conference here.

As of April 30, 2019 the New York legislators, in both the state Assembly and Senate, voted for first passage of a proposed amendment to the NY State Constitution (A2064/S2072) that would recognize and protect the inalienable right to clean water, clean air and a healthful environment. The vote count was overwhelmingly in support of passage with senators voting for passage 45 to 17 and the Assembly members voting 110-34. 90 organizations have signed on to a letter in support of the first passage.

Who are our Partners in the state?

Find out where else we are working.

Learn more about Green Amendments For the Generations at forthegenerations.org.

Coming this week, hear a panel of legal experts who really know the answers to your questions about how the New Mexico Green Amendment will help advance environmental protection, environmental justice, climate justice and generational protection. Don't believe the talking points of industry, believe the truth from those with experience.click here to register; us02web.zoom.us/webinar/register/WN_pMqi7DO8RPa20IbFxmkkJQ ... See MoreSee Less

“Make no mistake: when it comes to the environment, you are entitled.” Maya van Rossum.📕In our latest blog, we're highlighting The Green Amendment book by Maya K. van Rossum, founder of Green Amendments for the Generations. Who is leveraging constitutional rights to enable changes in environmental lawRead the full post by clicking on the link in our stories 📷Image credits: Maya van Rossum#ConservationOptimism #Conservation #ClimateChange #GreenAmendment #WaterPollution #environmentaljustice ... See MoreSee Less